Sol Bernstein is the comic creation of Steve Jameson, himself a top comedy performer.

The character Sol Bernstein perform a solo show at the Edinburgh Festival 2003 to rave reviews:

"One part Alf Garnett, two parts Mel Brooks and three part like nothing else you have heard. Bernstein is a great new comic creation in the making" - The Guardian

"an instantly winning creation" - The Independent

It's true! After 25 years of semi retirement, playing nursing homes, Sol Bernstein is back where he belongs, in smoky nightclubs performing to drunks.

The legend that is Sol Bernstein escaped the Pogroms in Russia, the Nazis in Germany and Mosleys blackshirts in London, went on to become the World's 1st all-round entertainer. He's a song and dance man, a comedian, a magician, an actor, an amazing ventriloquist (with his suitcase friend Mr Pinkus) a Jazz musician (Sol was rated as the BEST TRIANGLE player in the USA in the 50's by performers like Louis Armstrong and Duke Ellington ). Also rated the best impersonator EVER !!

He's performed all over the world at venues including The London Palladium, New York's Carnegie Hall, The Paris Olympia, Caesars Palace Las Vegas, The Scunthorpe Baths, but it's at night clubs where Sol really comes to life. His charisma, his walking stick, his catch phrase "why don't you put on a tie" his chutzpah, put it all together and you see the magic that is Sol Bernstein.

He's the man who helped the career's of Elvis Presley. Marcel Marceau (and never even got a "Thank you") and even the Beatles were influenced. He's worked with, and been friends with, some of the worlds GREATEST performers, Elvis, Judy Garland, The Rat Pack, Lenny Bruce, Jack Benny, George Burns, Milton Berle, Doris Day, Tommy Cooper, Eric Morecambe, Eddie Large

What performers have said about Sol:

"He's the greatest" Sammy Davis Jr.
"The man is what SHOW business is all about" Liberace
"Sol broke all the barriers in comedy" Lenny Bruce
"He taught me to dance" Bruce Forsyth
"The world's greatest entertainer" Al Jolson
" Who ?" Eddie Izzard
"What a catch phrase!!" Harry Hill 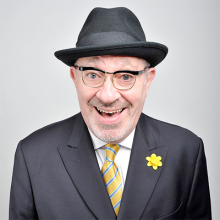 Class club, what a pleasure.